“Stepping  into the Whirinaki  Forest is like travelling back in time. Giant trees,ancient and moss-laden, tower overhead, soaring up to 65 metres into the sky” So say Ngati Whare who co-govern this forest alongside the Dept. of Conservation. They have established a native nursery in the Minginui village and plan to restore hundreds of hectares that was once milled back into native forest. The Mangamate Loop track is a 3 day, 2 night (34.3km), an ideal introduction to back country tramping.

Saturday :We arrived at the River Road car park which was full of vehicles, in cloudy overcast conditions and surprisingly, no kaka chorus. After a quick bite to eat and some groaning as we shouldered our weekend packs, we set off on a benched track amidst these giant trees to the Whaiti Nui-a Toi canyon and the main river track. A whistle from the river alerted us to blue duck and we watched a pair of whio feeding on the lichen covered rocks. Soon we came to the Mangamate Stream and the start of 70+ crossings, each clearly marked with both large and small orange markers. We then came upon the old hut site, the only remnants being the concrete fireplace and the long drop. Upon leaving the grassy clearing we entered  an area of scrubby bush, with a short sharp ascent which had us all puffing and then finally onto the wide benched track winding its way through mainly tawa trees to the brightly painted red door of the Mangamate Hut.

The hut is a 9 bunker nestled in the saddle between the Mangamate and Kakaiti streams. No one was in residence, so we grabbed the bottom bunks, with Kurt erecting his tent next to the helipad. Later  a couple arrived, erecting a bivy by the track edge  and at dusk a father and son arrived , happy to see the hut and didn’t mind the clamber up onto the top bunks.

It was a very clear night but Sunday morning dawned cool and overcast as we set off. There was initially a short climb before descending down to the Kakaiti stream. This section was not as well marked, but still easy to follow with over 60 crossings. A lot of old windfall and brightly coloured fungi everywhere; cream and brown, yellow and the small orange varieties, plus the bush lawyer and ongaonga to entrap us if we were not careful. The ground began to flatten out, with mainly large beech trees and the odd podocarp as we neared the Upper Whirinaki track junction. Lots of birdlife were heard and seen on this section- tui/ tomtit/ robins galore!/ keruru/ kaka/ grey warblers/ whiteheads/wax eyes. After a couple of kilometres the Taumatu bridge appeared and we were now on the main Whirinaki track , the podocarps reappearing  as we followed the undulating track to the hut.

We arrived at Central Whirinaki Hut just after midday with nobody at the hut and ate our lunch in sunshine and chilled out. Over the afternoon, fellow trampers drifted in  and by 5.00pm  the hut was full with two family groups who had carried in some dry firewood, an older couple with super-light gear doing the long 4 day circuit, Gareth and his dad, who were with us at Mangamate , three young women from Auckland and a young couple. As the temperature started to plummet the fire was lit, evening meals cooked and then it was into the card games, 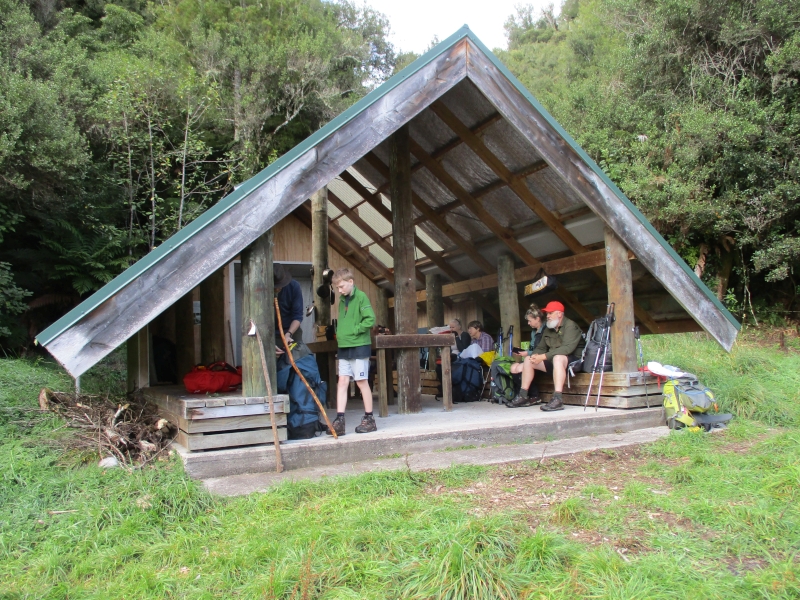 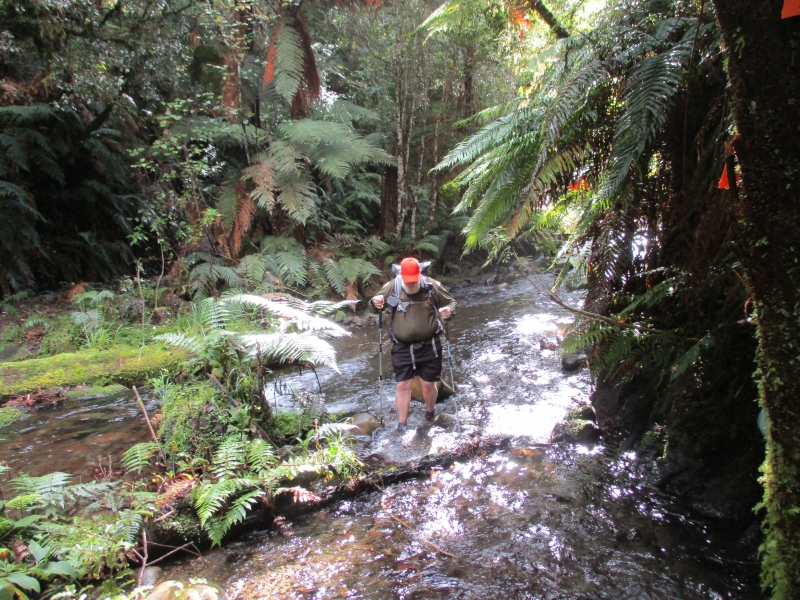 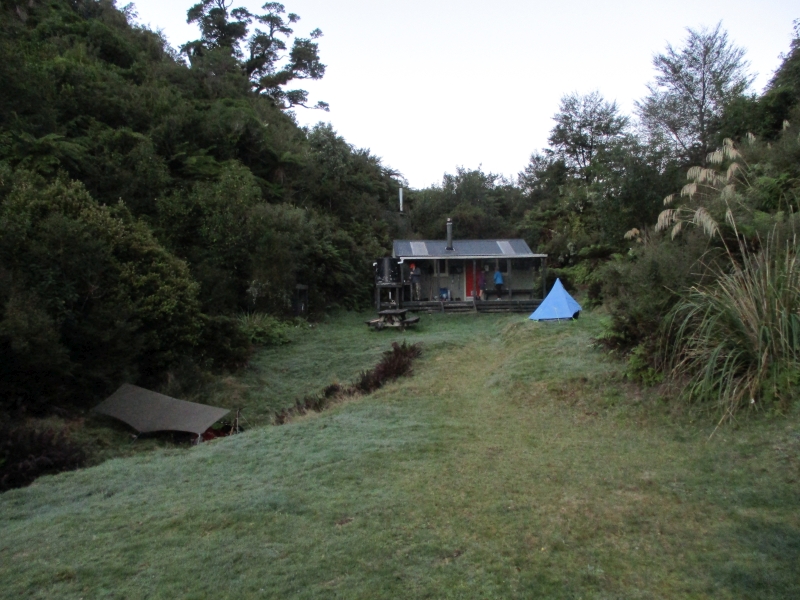 Monday saw everyone up, cooking breakfast, packing, saying farewells and then our crew set off back to the River road car park.  What an area to be in, walking along the banks of the Whirinaki River in perfect weather, listing to the water flow over cascades, looking for whio and trout . Each time the fisherpersons among us stopped to admire the trout, the size increased enormously! – how the water magnifies everything. After 2.5 hours and 8 kms we stopped at Vern’s Camp , a shelter in a grassy clearing,  for about 20 minutes then continued on the to waterfall and decided to follow the loop track clockwise back to the van.

A total of 42km was travelled over 3 days- about 4-5hrs each day, plenty of stops and photo opportunities and we met a lot of great fellow trampers in the park. Unfortunately it was time to leave this idyllic spot. We drove back via Waiotapu and Reporoa with a stop at Arataki Honey’s Benny Bee cafe- recommend this to anyone. My thanks to everyone, what a great crew who really gelled and made it an awesome weekend. Special thanks to our driver, Lex – driving and then tramping must be be tiring and without  our drivers we wouldn’t get into the places we tramp. Party: Lex S; Kurt F; Paula K; Jude H; Anne D; Simon W and Susan L.

We meet every 2nd Wednesday at the Hastings Harriers Hall, Sylvan Road, Hasting